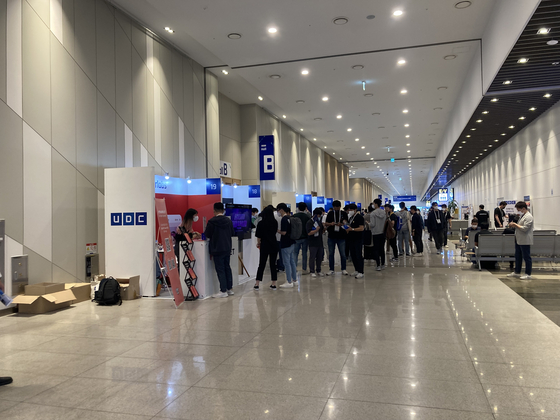 People look around the booths at the Upbit Developer Conference held in Busan on Thursday. [JIN MIN-JI]


Speakers from around the world shared their insights on the blockchain at the Upbit Developer Conference (UDC), which began Thursday.

UDC is an annual conference that brings together blockchain developers to discuss the industry’s potential while also examining the changes the technology has already brought to daily lives. The two-day event hosted by Dunamu, a crypto exchange operator, at the Busan Port International Exhibition & Convention Center in Busan.

Web 3.0, and Layer 2 were some of the key concepts discussed by the speakers.

Web 3.0 is the next generation web in which most users will be connected via a decentralized network. Layer 2 is a secondary framework that is built on top of an existing blockchain system. The goal is to raise the transaction speed.

“We’re trying to bring Web 3.0 to the masses, public,” said Kevin Ang, Developer Relations APAC Lead at Polygon. He said that there are so many killer applications that can be built in the metaverse, and for that to be realized, Layer 2 is needed.

Polygon is a Layer 2 platform designed to improve transaction execution on the Ethereum network. 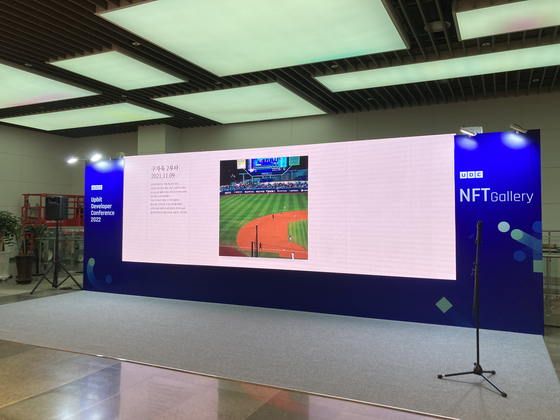 A baseball game NFT is shown at the NFT Gallery at the Upbit Developer Conference in Busan on Thursday. [JIN MIN-JI]

Mel McCann, vice president of Engineering at Cardano Foundation, a Swiss company that supervises the Cardano blockchain platform, said it’s unrealistic to think that Web 2.0 will die out as a result of Web 3.0. They will co-exist, just like the coexistence of nuclear power plants and coal power plant, he said.

Web 3.0 will become particularly important as people increasingly value privacy, according to Brian McKenna, head of product at Mina Protocol.

Deciding on private information access and not being concerned about losing personal data from the mismanagement of a company will become possible in the Web 3.0 era, he said.

Apart from speeches, NFT artwork featuring baseball games in a video were displayed at the event.